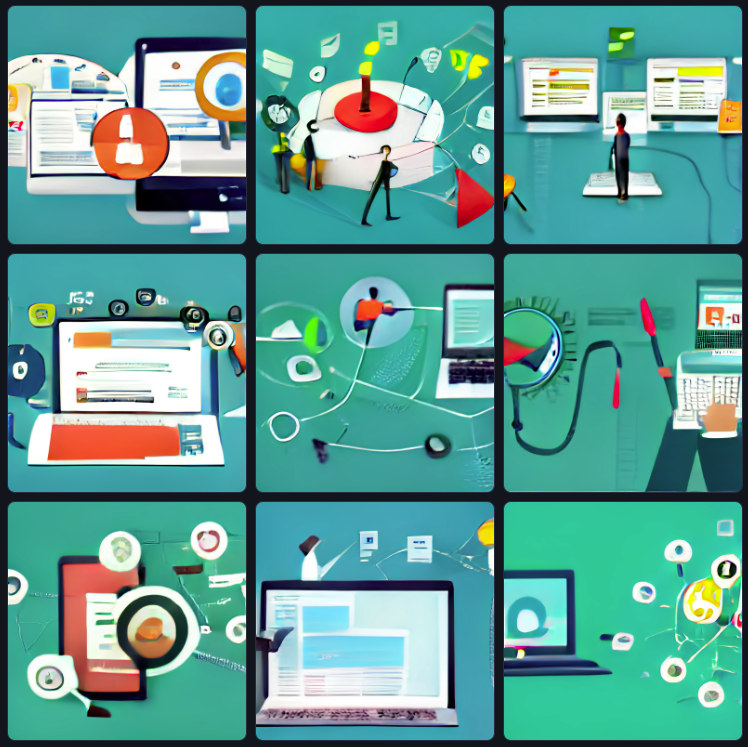 In the early days of the internet, search engines were still in their infancy. Before 1990, online services such as CompuServe (which was founded in 1969), Prodigy (founded in 1984) and AOL (founded in 1985) offered a hybrid of proprietary online network and content services, with limited Internet connectivity. During that time in the 1980s, there was also an explosion of Bulletin Board Service (BBS) servers that were run by independent people. Sometimes the servers were only up as long as the host’s phone line was connected. Often they were limited to anywhere from 1 – 24 simultaneous users, depending on the telecom lines that the host had connected to their server. 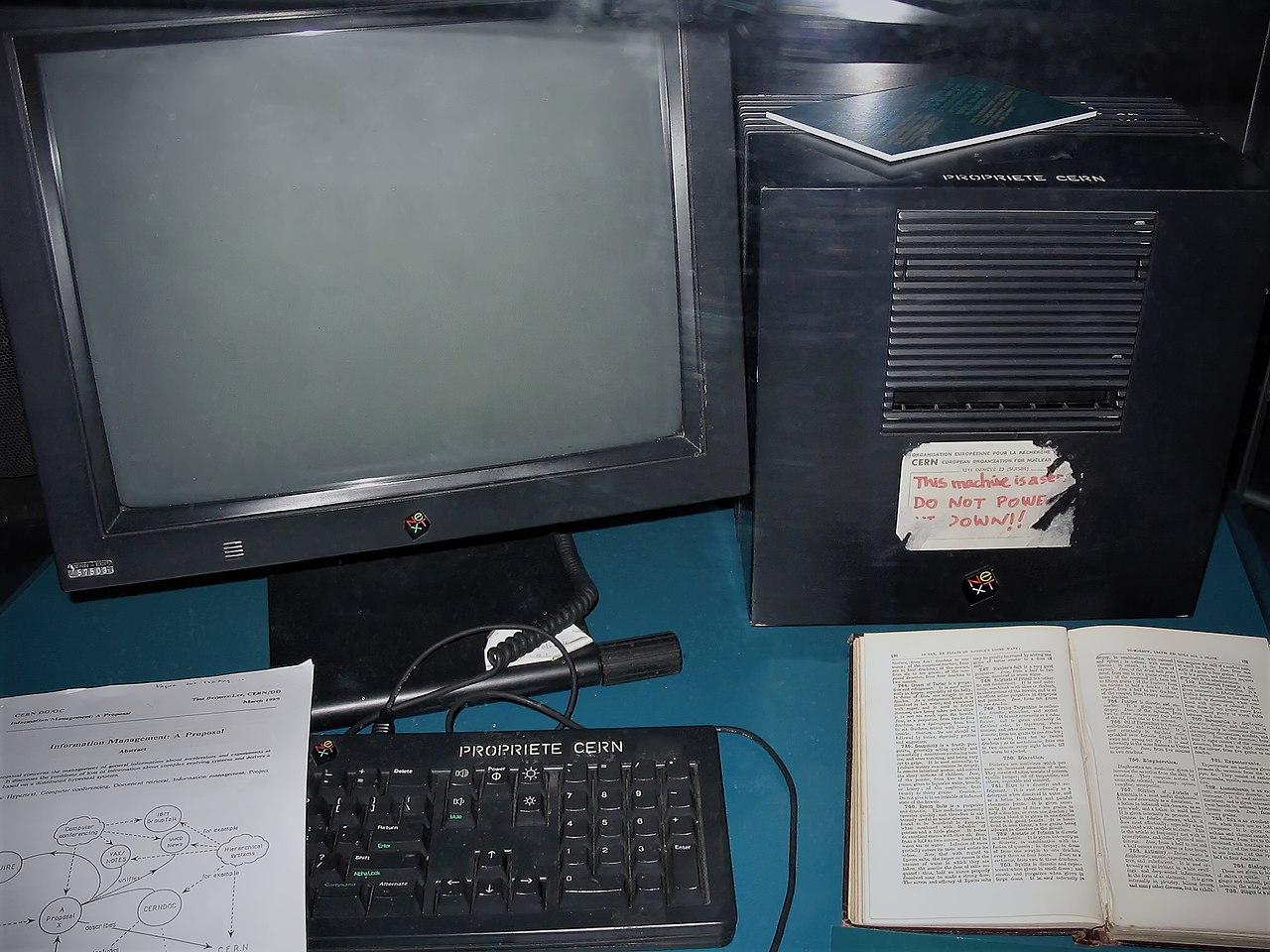 Since 1989, once Tim Berners-Lee created the World Wide Web (using a NeXT computer system, comprised of the NeXTcube, NeXT keyboard and NeXT monitor pictured above as the very first web server), pages started to appear on a quickly growing number of pioneering websites. At that time, few, if any, were marketing anything. There were some early adopters who were experimenting with all sorts of ways to reach people and grow their base of customers, including giveaways (ie: signup to an email list in order to get a free T-shirt or hat, signup for free cash prizes to be mailed to the winners, etc.) but it was a far cry from any sort of slick online marketing. It was rudimentary at best. These were the days of massive discovery about how things could happen on the web. What sorts of interactions were possible. Every new experiment of consequence unearthed keys to comprehending how people were using this nascent digital telecommunications technology.

One of the first web search engines, Archie, was launched in 1992. It was primarily used by researchers and academics to find files stored on FTP servers. However, as the internet began to expand, more and more websites were created, and the need for a way to search the web grew.

LexisNexis also provided users with a massive search engine of its database of news and legal records, which was extremely useful to academics, students and researchers. It was a successful commercial searchable database. LexisNexis still functions today.

The very first known search engines focused on the web included JumpStation, the World Wide Web Worm, and the Repository-Based Software Engineering (RBSE) spider. They used automatic programs, called robots or spiders, to request webpages and then report what they found to a database. Those first spiders weren’t that useful.

In 1994, Yahoo! was founded and created a manually curated search engine of websites. While it was considered high quality, one of its drawbacks was that as the internet grew with massive acceleration, the number of web pages far outpaced the company’s ability to index websites and it could take weeks if not months for websites to find their way into the Yahoo! searchable web index pages.

During this time, SEO was not yet a thing, and website owners had very little understanding of how search engines worked. However, they quickly realized that by including keywords on their website, they could increase their chances of being found by search engines. As a result, many websites began to stuff their pages with keywords in an attempt to improve their rankings.

As a result, the practice of keyword stuffing became less effective. Website owners began to realize that in order to improve their rankings, they needed to focus on creating high-quality content and building backlinks. According to a study by Moz, backlinks were the most important ranking factor for Google until around 2010, where it dropped to the second place.

In 2003, the social media site MySpace was launched, and quickly became one of the most popular websites on the internet. It was far from the first. Friendster was probably the most popular social network before MySpace, though it was increasingly used by spammers and quickly fell by the wayside once MySpace took off. DeviantArt was founded in 2000 as a website for artists to post and promote their artwork, and was an early social network. There was also the social network developed by School Sucks, which was a popular website among students and teachers, serving as a repository of student papers submitted to the website by their writers, as a way to hold the academic system accountable by showing the quality of works produced by students of school in the US and around the world. Its social network was added a few years after the site was created, and had many students connecting and sharing information on the website, and in addition to the site’s primary function, its database of papers, much of what was shared on its social network was optimized by the site’s developers to be searchable in Google, Yahoo! and other search engines. Other social media platforms like Facebook, Twitter, and LinkedIn soon followed. With the rise of social media, website owners began to realize the potential of these platforms for driving organic growth.

By creating valuable content and engaging with their audience on social media, website owners could reach a wider audience and drive more traffic to their sites. According to a study by Hootsuite, Facebook alone had 2.8 billion monthly active users in 2020, making it a powerful tool for driving organic growth.

As social media platforms continued to grow, their algorithms rapidly began to change. This had a huge impact and was a big leap in the evolution of organic web growth hack methods for marketing websites. In an effort to monetize their platforms, social media companies began to decrease the organic reach of posts, making it more difficult for website owners to reach their audience without investing in paid advertising.

According to a study by Sprout Social, the average organic reach for a Facebook post in 2015 was around 6.4%, which dropped to 2.2% in 2016, and continued to decline. This led many website owners to shift their focus away from social media and towards other methods for driving organic growth.

In recent years, website owners have come to realize the importance of user experience in driving organic growth. Fast-loading pages, mobile-friendly design, and easy navigation are all important for keeping visitors on your site and encouraging them to come back. According to a study by Google, 53% of mobile users leave a website that takes longer than 3 seconds to load.

Additionally, the use of voice assistants like Alexa and Google Home have become more popular, and websites must now optimize for voice search queries, by including long-tail keywords.

2023: The Rise of Machine Learning and Artificial Intelligence

As of late 2022 and leading into 2023, machine learning solutions like OpenAI’s ChatGPT have seen an explosion of commercial use. SEOs are now filling up an increased number of web pages with computer generated content that use large language models to create content on the fly. And that content is optimized at varying levels, depending on the complexity of the query made to the machine language or AI chatbot assistant at hand.

Of course, ChatGPT is far from the only such tool available. There are even free, open source solutions available including GPT-J, GPT-NeoX, Bloom and OPT, among others in production or development.

Furthermore, there are also AI based solutions to generate text to speech, images, videos and virtually any kind of content you might think of, which empower incredibly fast production of content, at extremely high levels. And this is just the beginning of these far-reaching and potent tools that a marketer may use to generate better performance and results for their marketing strategies, tactics and campaigns.

The future evolution of internet marketing

What’s next for the future evolution of organic web growth hack methods of internet marketing? Stay tuned to this blog, as we will be sure to cover the significant updates and key evolutionary steps along the way.

Subscribe To Our Newsletter & Get our Mobile-First SEO Guide eBook

Join our mailing list to receive the latest news and updates from our team, and to receive a free copy of our Mobile-First SEO Guide eBook.

Congratulations! Your subscription was registered successfully! In a moment, you will receive the link to download your copy of the Mobile-First SEO Guide eBook.